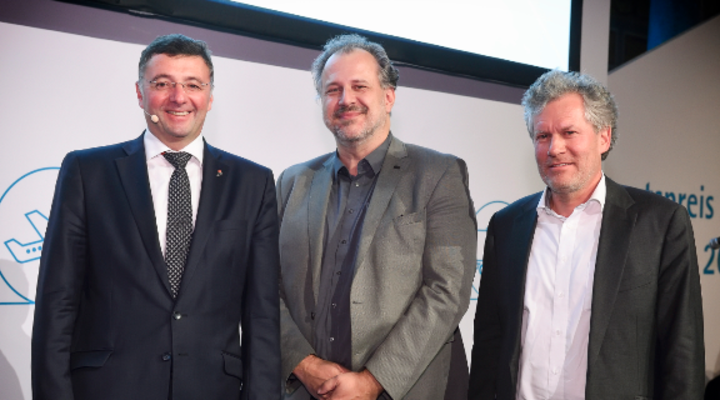 Posted at 11:44h in News by Wolfgang Kuhn

For three years, the Graz research center VIRTUAL VEHICLE was part of the major European project DEWI and worked at the same time as overall coordinator. The goal: strengthening Europe’s leading position in the field of wireless systems and the Internet of Things in the mobility industry. On November 27, 2017 the project was honored with this year’s “Staatspreis Mobilität” (Austrian Mobility Award) – the highest distinction for Austrian organizations given by the Federal Ministry of Transport, Innovation and Technology.

The DEWI (Dependable Embedded Wireless Infrastructure) project brought together 58 European industrial and research partners from 11 countries under the direction of VIRTUAL VEHICLE. The project worked on reliable, intelligent and connected wireless solutions in the automotive, railway, aerospace and infrastructure industries for three years (2014 – 2017).

At the Austrian Staatspreis Mobilität 2017, DEWI was able to prevail among around 80 submissions and was honored as a top 3 finalist in the category “Research, Development, New Paths.” The winner of this category also comes from Graz: The Graz University of Technology convinced with their project “H2-Mobility”. The prize is awarded every two years by the Federal Ministry of Transport, Innovation and Technology.

Dr. Werner Rom, Project Coordinator and Head of Department at the VIRTUAL VEHICLE Research Center: “DEWI was one of the biggest funded European R&D projects and a pan-European initiative. But above all, it promotes Austria’s leading position in the development and deployment of intelligent wireless environments. The appreciation by the Staatspreis Mobilität motivates us to further expand this leading position.”

In the spring of 2017, SCOTT was launched as a follow-up of the DEWI project, also run by the VIRTUAL VEHICLE. Here, the focus is particular on cyber security, data protection and increasing trust in wireless solutions.