Modern electrified vehicles require high density energy storage devices in order to reach the vehicle range targets. Automotive engineers are hence facing the challenge task to design high voltage battery systems, which do not only have the expected energy density, but their functional performance attributes also meet the safety and comfort targets. One possible strategy is to reduce the mass of the electrically passive parts of the battery, while maintaining the crash and NVH performance attributes. In order to exploit the physical limits regarding the energy density, the high voltage batteries need to be developed in a multi-disciplinary manner, where both the safety and NVH design is conducted in parallel.

Nonetheless, the common practice is that design of vehicle and its electric components is still considered as two separate tracks. In particular in an early design phase, vehicle developers are missing most of the relevant data regarding the battery system. On the contrary, component suppliers lack a sufficient knowledge about the vehicle structure the components will be integrated in.

The battery tests are performed either on a complete battery — called a pack — or on one or more cells that make up the battery.

Crash safety requirements are reached by avoiding critical deformations of the battery pack. Battery cells, the electrochemical heart of a complete battery, are the key item-of-interest when considering the crash safety attributes of a battery. Their inherently unsafe characteristics, when critically damaged, can lead to a thermal-runaway producing large amount of heat and toxic gases. This critical deformation needs to be avoided. The battery cell can be hence considered as a new vehicle occupant with its specific needs regarding safety.

When it comes to NVH attributes of an electrified vehicle, the significant effect of the mass and stiffness added by the high voltage battery needs to be considered. In order to meet the passenger comfort targets, the goal is to achieve as high as possible frequency of the first global eigenmode of the battery pack. Eigenfrequencies of global vibration modes influence the transmission behavior of the vibrations from the sources into the interior as well as the driving behavior of the vehicles. Vehicles with high eigenfrequencies of their global vibrations convey the attributes, which are correlated to a higher value, comfort and safety by the customers.

Topology optimization is an indispensable tool to achieve optimal design exhibiting the best stiffness-to-mass ratio with the objective of maximizing the frequency of the global eigenmodes. As the optimization implies high computational burden, model order reduction techniques are typically applied.

Relevant data regarding the battery system

The best of the both worlds

An integrated approach to design an electrified vehicle involving both the crash safety and NVH attributes into one seamless development processes can exploit new potentials. This strategy has been successfully applied for an optimized design of a plug-in hybrid vehicle. Despite the added mass of the battery, this allowed to design a vehicle meeting high NVH and safety targets.

Design goals when considering interdisciplinary NVH and crash requirements are as follows: 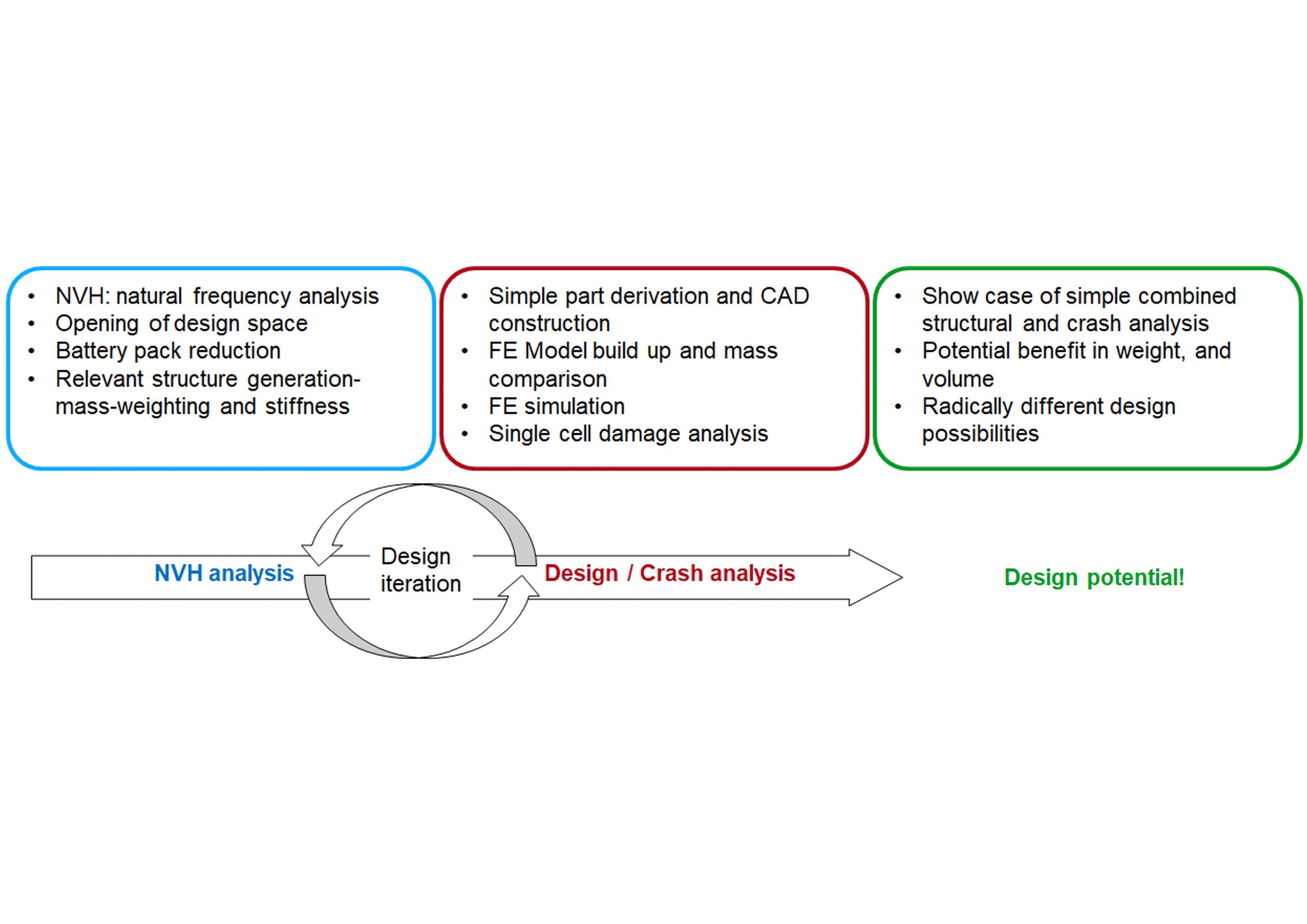 The structural NVH optimization and the subsequent radical pack re-design allowed for a substantial weight reduction without any negative impact on the crash performance attributes. By accounting for the parts for structural integration (cell/module mounting parts), this optimization process demonstrates a weight reduction of roughly 50% for the electrically passive parts of a high voltage battery.